On the show were Hank Kee, Alfred Poor and Michael Horowitz. A new 35mm CMOS image sensor from Sony. An broken underground cable caused large disruptions in Internet access in Egypt and India. A huge amount of Apple iPhones were sold but not activated. InfoWorld has a petition to keep Windows XP alive. See www.savexp.com.

We briefly discussed rear projection TVs with Alfred noting that many newer models no longer have light bulbs that burn out in a few years. In fact, some models of rear projection sets have a light source that will never burn out. Also, the name "rear projection" does them a dis-service as many are 10 to 12 inches deep. In larger size TVs, rear projection models are a bargain. Alfred said a 56 inch Panasonic model was recently on sale for under $1,000.

Michael discussed the XO laptop from One Laptop Per Child. Below are pictures of the XP vs. the Asus EEE computer running Windows XP (it ships with Linux). Click on each image for a larger version of it. 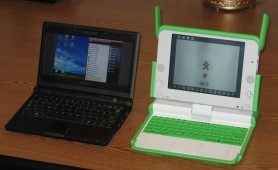 Michael didn't like it, but it was not designed for use in New York City and not targeted at adults. You can't buy it any more, you can only donate one by making a $200 contribution. A low end Asus EEE machine can be had for $300, which to Michael seems like a huge bargain compared to the XO. The XO is very slow and the keyboard is so small, that an adult can't touch type on it.

It runs a customized version of Linux that is very non-standard and confusing to use. It lacks things like an X to close out of the current window, a file system, copy/paste. Even the keyboard is not standard - for example there is an Erase key but no backsapce or delete keys. There is no tech support, no printed manual and no email program. And it can't print at all. It connects to mesh networks but there aren't many of those in New York City. It can connect to a non-encrypted WiFi network but those are few in number. It can connect to WEP encrypted WiFi networks but those too are on the way out. It can not connect to WPA encrypted WiFi networks.

Hank reviewed the Pinnacle PC2TV, which is somewhat like Slingbox. It does more than the Slingbox and is cheaper (it sells for about $160 to $170). Among the extra features are wireless access, the Slingbox is all wires. Hank found that it felt cheap and you couldn't read the manual until after the product was already installed.

Alfred reviewed an OCR (Optical Character Recognition) product from ABBYY called FineReader® 9.0 Professional Edition. He loved it. In addition to OCR, it can also open and edit a PDF file directly. See www.abbyyusa.com. It runs on Windows Vista, XP, 2000 and Server 2003. It requires 512MB of RAM and 762MB of hard disk space. The Competitive Upgrade is $180, the standard version is $400.

Our topic was Microsoft Unified Communications and our guest was Steven Chirico, a senior technical specialist at Microsoft.

Quoting Microsoft on the subject: "Microsoft unified communications technologies use the power of software to deliver complete communications -- messaging, voice, and video -- across the applications and devices that people use every day. Integrating the experiences you associate with the telephone -- phone calls, voice mail, and conferencing--into the work you do on a computer -- documents, spreadsheets, instant messaging, e-mail, calendars -- has the power to fundamentally change the way the world works. Microsoft believes unified communications will transform business in the coming decade in the same way e-mail changed the business landscape in the 1990s."

Microsoft sells software called Office Communication Server to businesses. It runs on the server versions of Windows. More more about this see www.microsoft.com/uc. On the show were Hank Kee, Alfred Poor and Michael Horowitz.

Our guest was Ben Patterson, the "gadget hound" at Yahoo Tech.

Apple just introduced a new ultra-thin laptop, the Macbook Air. No doubt it's sexy, but there it leaves quite a bit to be desired. Hank compared it to the similar Lenovo X61s and found that the Lenovo computer is lighter, and has a smaller footprint. The Macbook Air however is thinner. The Macbook screen is 13.3 inches and it weights about 3 pounds. At its thickest point it is .76 inches. But, the bad stuff

Many ultra-lights don't have an optical drive and neither does the Macbook Air. The non-re placable battery seems like a huge drawback to people that travel often. When the battery poops out in a few years you have to return the computer to Apple for $129. While they are working on the battery, you don't have a computer, not to mention, any personal files that might be on your computer that Apple has access to. The lack of an express card slot is a problem for someone using a 3G data network.

Both Ben and Alfred were at the recent CES show in Vegas.

They were wowed by a 150 inch plasma TV with 4 times the resolution of a typical HD set. It's not for sale though. Ben was very impressed with a video headset that is great for gaming. Hank's favorite toy, the Asus EEE laptop computer was a big hit at CES. It now runs Linux and will soon come out with an XP version. Hank has already installed XP on his. Alfred was very impressed with some custom made computers by a friend of his. You can see them at slipperyskip.com.

1080P resolution is really needed for High Defintion, but on screens smaller than 42 inches, most people won't notice the difference if they have the the lower 720P resolution. Most plasma screens are 720P. You can play Blu-ray DVDs on a 720P screen, the panel itself scales the picture down from the original 1080P resolution. Starting this year, all LCD screens 32 inches and higher will be 1080P. Sales are way down for plasma TVs.

As for games, Uncharted is a new game for hte Play Station 3 that's getting great reviews. The Xbox online service was down for about 2 weeks. Ben saw demo of a new Star Wars game coming out this summer for PS3 and Xbox 360 and Wii. He's not allowed to say much about it though.

Intel and One Laptop Per Child got a divorce. Intel's classmate somewhat competes with the OLPC. Comcast was acused of interfering with peer to peer networking. Microsoft bought FAST of Norway, the company behind All The Web, the firt fast search engine. FAST specializes in private intranet searching. Yahoo's search engine scored well in a recent test for the quality of its search results.

Our guest was David Perry, the Global Director of Information at Trend Micro. In a recent test all anti-virus software did a poor job at detecting new viruses. Malicious software (malware) is now very big business with organized crime behind some of it. Trend Micro gets 2,000 to 3,000 new malware samples every hour.

Every computer show is mandated this week to cover the CES show. We complied by discussing the stuff David found most interesting at the show: robots, video goggles and a Sony OLED 23 inch television with stunning picture quality.

We thank those of you who made contributions to WBAI via the wbai.org website.

Alfred is reporting from CES this week. Read his HDTV Almanac blog.

Our guest was Robin Raskin and the topic was how children use the Internet and what parents can do to make the experience less dangerous.

On the show were Joe, Hank Kee, Alfred Poor, Michael Horowitz and Bob Salamon. Next week our guest will be David Perry and the topic will be fighting viruses and other assorted malicious software (malware).